On Saturday, Alex planned a book release party for me at one of my favorite bars in the area, Mickey Finns Brewery (microbrews...yum).

It was so amazing to have family, friends and coworkers there to celebrate my book. And celebrate, we did. Alex had an awesome banner made. Lots of pictures were taken surrounding said banner: 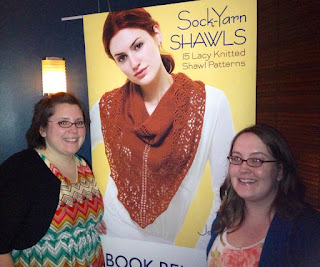 I think Melissa was very excited to see the sample she knit in gigantic banner form. :) My coworkers suggested that for my next book party we cut a hole where the model's face is on the banner so people can stick their head in and be on the cover of my next book. I couldn't argue with that. Sounds like an awesome and hilarious idea to me.

I signed some books for my family and friends, and some insisted on being ridiculous while I did so: 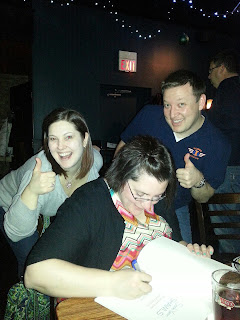 Ryan, in particular, who knows that I have a weird obsession with fake mustaches, tried to creep me out while I was signing his book. Uh, he succeeded. And, of course there was a cake, complete with a yarn ball and needles: It was a fantastic night and I feel so lucky to be surrounded by people who support me and my design endeavors. Can't wait for the next book party. :)