I've been touching on the subject of rejection a bit in this Design Your Biz series, but today it's time to dedicate a whole post to it. 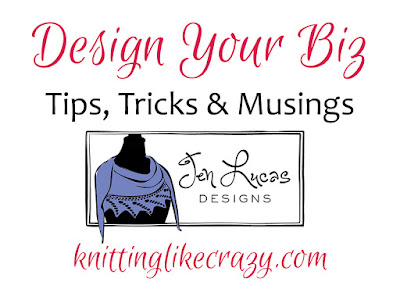 Rejection - in this business, most of us experience it. Sure, you can just self-publish all your designs, but many of us have to diversify our income streams, and that often means looking for third-party work, whether that's with magazines, yarn companies, or writing books.

At first, the rejection would really get me down. I'd ask myself why in the world am I doing this to myself, why do I suck, etc. The negative self-talk was really bringing me down.

Then I changed my attitude.

Just because I got rejected from a magazine or whatever, doesn't mean that my idea is bad. It's just not the right fit, right now. Maybe they received two submissions that were similar and had to pick one. Maybe they are publishing something similar in an upcoming issue. Maybe it's just a matter of there was a lot of good stuff and you just missed the cut. There are tons of reasons for my submission not being accepted, and, most likely, I'll never find out why it was rejected. Which leads me to my next point.....

Resist the urge to start a dialog about why your design wasn't accepted. If you have an excellent working relationship with the company, you might be able to get away with asking for feedback, but most of the time, you're just going to get a canned letter of "we had lots of great designs and couldn't pick them all." It's better just to move on.

Once your design submission has been rejected, what do you do? Often times, I'll submit the same exact idea for the next submission call that comes along where it might be a good fit. Occasionally, I'll tweak things if I think I can do something to make it better, but a lot of times it's about just changing some of the text and sending it along to the next company. But be sure to wait until you get that acceptance or rejection email! You don't want to be in a situation where you submitted the same idea two different places and they both get accepted. One at a time for your awesome idea is the way to go!

Sometimes, I'll self-publish the design after it's been rejected. That's what happened with my Wallingford pattern. And, guess what? It ended up being better in the long run, I made way more money self-publishing this design than I would have from a third-party contract. It's still one of my best sellers today! 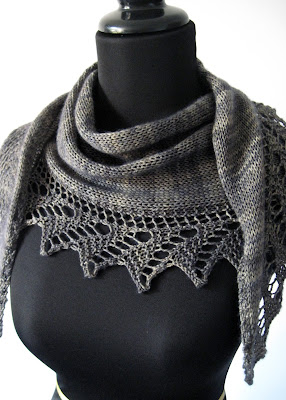 Just remember to keep your head up. Rejection happens in this business all the time. Keep going and you'll be on your way to building a successful pattern business!
Posted by Jen at 7:01:00 AM

Lots of blocking has been happening around here. 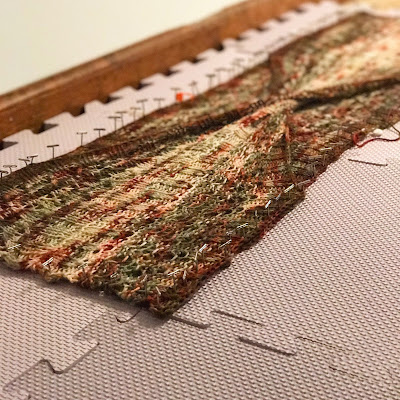 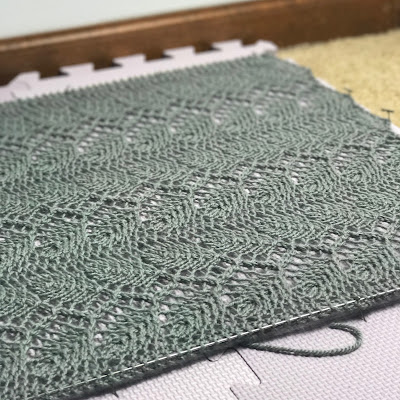 I swear, sometimes I think I've made it my personal quest to try all the yarn-related crafts. 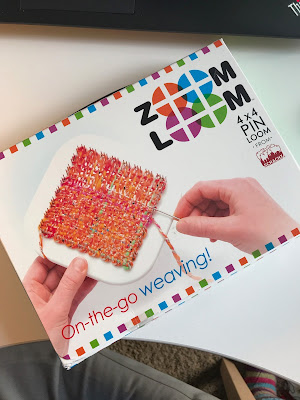 A few of my friends (I'm looking at you Angela, Heather & Barbara) have been into the pin looms lately. And, you know me, I don't like to be left out when it comes to the yarn things. So I ordered a Zoom Loom and soon I was on my way. 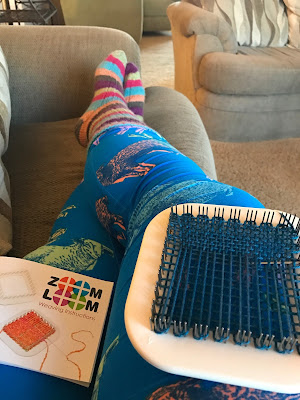 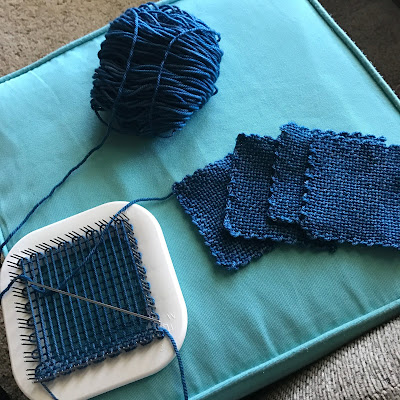 The Zoom Loom comes with a little instructions booklet. I found that was all I needed to get going! I'm currently at the stage of making random squares. What will become of the squares remains to be seen. I'm very interesting in sewing them together to make a blanket or shawl. Time will tell!

My Kindness KAL sale has come to an end. I'm very happy to report that it was a success! On Monday morning, I tallied the Gradient eBook sales (I also included the patterns that people bought at the same time as the Gradient Collection eBook) and sent it off to Halos of Hope. We raised $219.75  for Halos of Hope, and I rounded it up to $230! 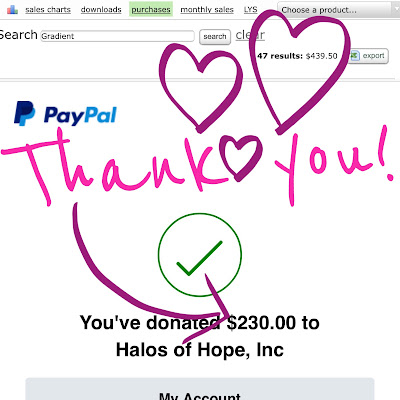 That $230 will be used to ship over 700 chemo hats to cancer centers all around the country. I'm so blown away by everyone's support and generosity. I shouldn't be surprised, though, knitters are a kind bunch of people.

The Knitcircus Kindness KAL has now officially started. It will benefit several charities, including Halos of Hope. If you want to find out more about it, you can check out the Knitcircus Ravelry group.

My first pattern (well, patterns) for 2017 is here! This is the Fox River Hat and Mitt set, published by Sweet Georgia Yarns: 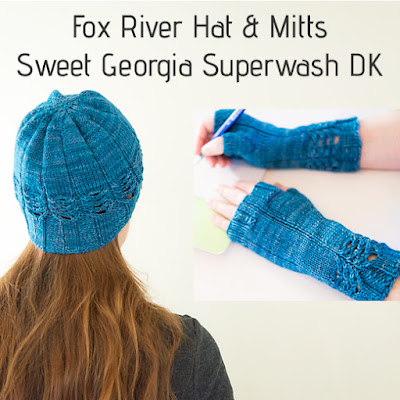 The set is knit in Sweet Georgia's Superwash DK yarn. This is some verrrrry lovely yarn. It's so squooshy and the stitch definition you get with it is amazing.

Both the hat and the mitts start with ribbing that flows seamlessly into the small lace pattern. The lace is created by making huge yarn overs - it was a blast to knit. After a few rounds of lace, it's time for a nice wide ribbing, giving the set a clean look. 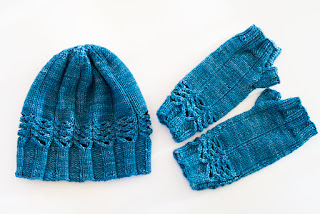 The hat is written for three sizes and the mitts are written for one size. Both have great stretch though, meaning you can make a set for all your friends!

Recently, I discussed working with yarn companies and magazines for my new crochet designs. Today, I’d like to follow that up with talking about putting together a professional proposal.

You’ll first need to find somewhere to submit your design idea. Many companies use the Designers forum on Ravelry to post their calls for submission. They will give you detailed information about what they are looking for in their posts, as well as links to mood boards and forms you may need to fill out. I check the Designers forum about once a week for calls I think I’d like to submit to. You can also visit the websites of your favorite magazines or yarn companies. Many of them have a link where you can sign up to receive emails for their calls for submissions.

So you’ve got the call for submissions, now it’s time to put together the proposal. Again, some companies might have a template to follow, but many just want a 1-page PDF explaining your design submission. Here’s the information you need to always include:
Here’s how I put my one-page submissions together. This was my submission for the Mandarijn Mitts. 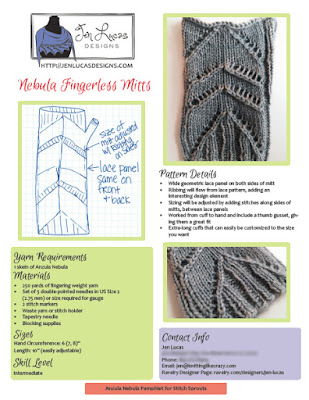 You can see from the proposal that you can get a pretty good idea of what the mitts will ultimately look like. Here are the finished mitts: 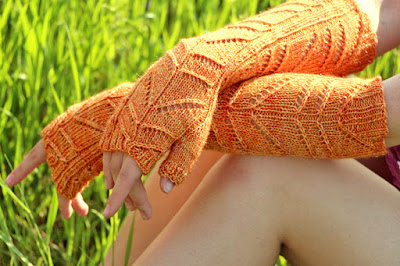 With your professional proposal and killer design idea, you’ll be getting accepted to that magazine or yarn company in no time! And, as I’ve written about before, if you get rejected, don’t worry. It happens to all of us. Now you have your proposal ready to go and you’ll be ready to submit it to another call when the time is right.
Posted by Jen at 7:08:00 AM

Did you hear? Knitcircus is hosting a Kindness KAL! It's a great way to start off the New Year and I'm thrilled to be involved with it.

The KAL will directly benefit: The Global Fund for Children, The Children’s Health Fund, Halos of Hope and The Road Home. The rules of the KAL are simple:

As for my part, I'm offering my Gradient Collection eBook for just $9. $4.50 of each eBook purchased will be donated to Halos of Hope! Most of you know collecting chemo caps and working with Halos of Hope is close to my heart, and I'd like to help them ship as many hats as possible. 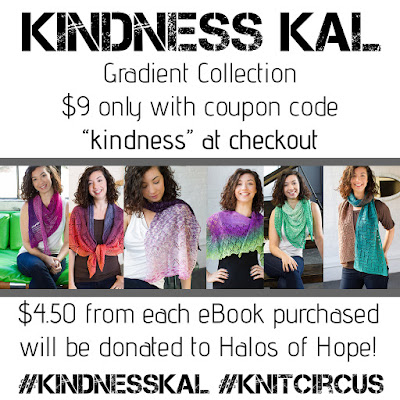 The coupon code is good thru January 15th, 2017. At that time, I'll tally the number of eBooks sold and will send a big fat check off to Halos of Hope!

Knitting stickers are the best stickers. 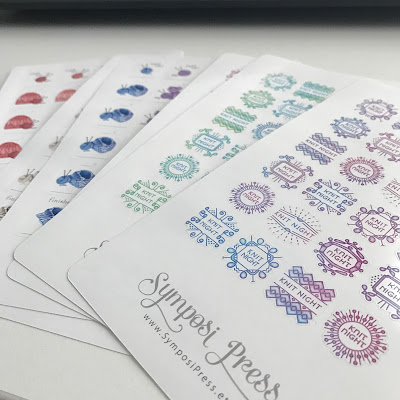 Purchased from Symposi Press.
Posted by Jen at 7:47:00 AM