so much knitting! and so little sleep. 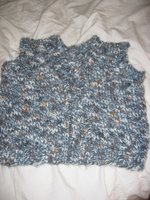 Well, yesterday I woke up in the middle of the night. After screwing around on the computer and trying to go back to sleep I did what I always do when this happens to me....I knit. So I managed to finish Peter's vest. I think it's pretty nice. I was at his house on Sunday and even though I am going to give it to him for Christmas I made him try it on to ensure it would fit. Yes, I measured him before I knit it, but I was super paranoid that it was going to fit him. That's me. The paranoid knitter.

So, after finishing Peter's sweater vest I was ready for something new. So I knit a 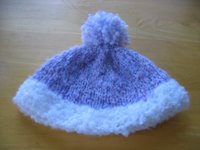 baby hat. Which, really, is not that new because I know 800 people who have had babies in the last year (800 being an exact number, of course). I never can find baby hat patterns that I really like so I winged it. It turned out pretty good. I used Bernat Baby Boucle. I started with a seed stitch border and then when I switched to the purple yarn I went with regular stockinette. Normally I am anti-pom pom but I thought the hat looked kind of like a Santa hat, and so the ball had to be put on the top. I decided to name the hat Jenna Baby (named after the baby Jenna so is the recipient of said hat). See, it's like Santa Baby, the song, only it's Jenna, well, never mind. If I feel the need to explain myself then it is probably not that funny or witty. There will likely be some matching booties or something to go with this hat in the very near future.

In sock knitting land I have made no progress on the socks. None whatsoever. But what are you going to do?

This week is a short week at work. Hooray for the short week. I think on Friday and Saturday I will have lots of knitting time and this pleases me greatly. I think I have declared that I am doing nothing on Saturday. Nothing but knitting, that is.
Posted by Jen at 8:37:00 PM