Well, I have been knitting like crazy here at, well, Knitting Like Crazy. I had the last couple days off of work to deal with angry uterus (which is far less angry now. Hooray!!!) and I had lots of time to sit on the couch and knit. 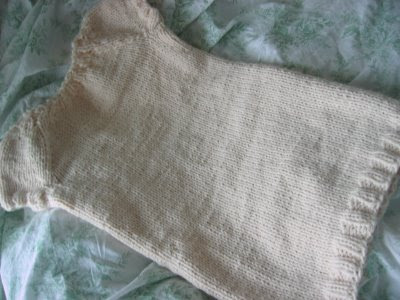 The Sweater Dress Specs:
The Pattern: Baby/Toddler Sweater Dress
The Yarn: Lion Brand Wool-Ease, double stranded in Cream
The Needles: US 9 and US 10
The Time to Knit: About a month. I worked on it on and off.
The Mods: I measured Lily and did the math accordingly. I thought I was going to put a button in the collar to accommodate a large kid head, but I think it is going to be fine the way it is. I went with a sewn bind off this time, and I think it will be stretchy enough to get over her head.
The Result: I love it. I think Lily will love it. I recommend this pattern for someone needing something quick and easy to knit. And, it's easy to adjust the math to fit your larger than baby/toddler sized daughter!

Then, yesterday, I finished my brother's Mega Man hat: 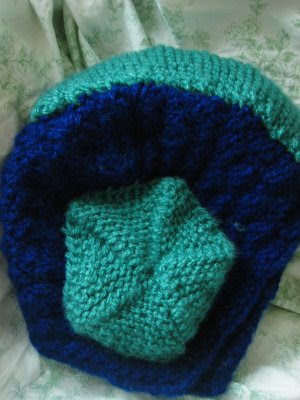 I think a nerdy 23 year old man living at home with his parents will greatly enjoy wearing me to his part-time job that he maintains in order to buy more video games for himself. 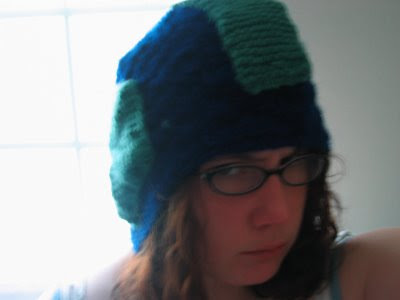 I will kick your a$$ with this hat on.
This hat is a little big for my head, but it is not meant for my head, so that's good.

The Specs:
The Pattern: Mega Man Hat by TrinKnitty
The Yarn: Lion Brand Jiffy one skein of blue, one skein of turquoise/green
The Needles: Size 7
The Time to Knit: About a month and a half. I lost interest in the project about halfway through and didn't work on it for awhile.
The Results: My brother will die when he gets it. He is going to love it.

There is other Christmas knitting out there (which you can see if you are on Ravelry), but I will not yet reveal it on my blog.

Anyway, that's all for now. Hope everyone is having a good weekend.

I may post again before Christmas, or maybe not. Depends on if I do anymore Christmas knitting I suppose. :)

Happy knitting and Merry Christmas!
Posted by Jen at 2:23:00 PM