Maybe it's not angry, it just has a drinking problem

That's right. I am talking about my uterus again. Really, I think it is not angry, but rather it has a drinking problem. See what I mean: 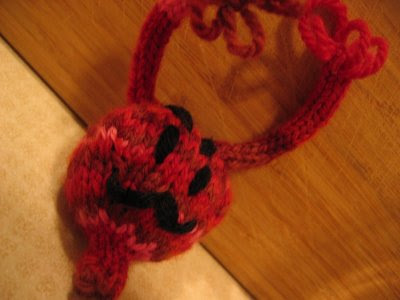 Dum, Dee, Dum. Just a uterus looking for a beverage. 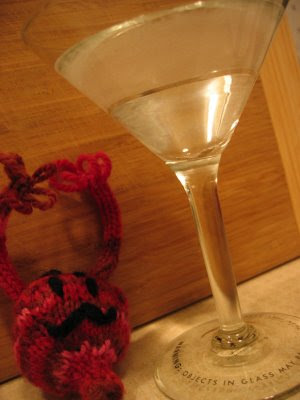 What's this? A tasty martini? Don't mind if I do! 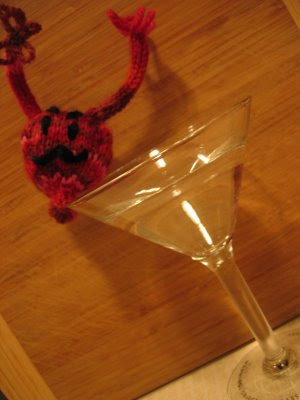 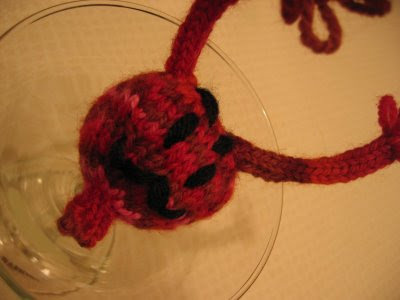 I knit up this up in just a couple of hours. And, I have to say, I think everyone needs one.

Here are the specs:

Pattern: Womb from Knitty
Yarn: Patons Merino (it was in the stash)
The Needles: Some dpns. I just grabbed what I could find. They were a size 5, I think
The mods: I added the face to my uterus. To make it angry. I had seen Cilona's Angry Uterus on Ravelry, and that really was my inspiration to knit this.

In addition to the angry uterus, I also finished up some purple socks for my sister (I don't think he reads my blog, so I am safe sharing them with you): 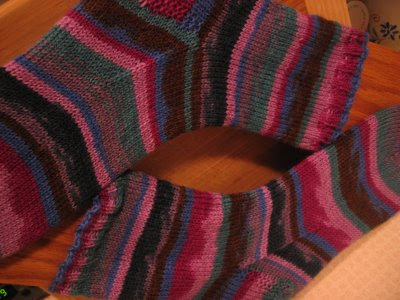 These were very fast-going socks. I just did a plain sock, 60 stitches around on size 2 needles. I knit them in three days (which is fast sock knitting for me!). The yarn was Kaffe Fassett Regia yarn. You can find some here.

I do have some other Christmas knitting to show off, but that will remain a secret for the time being. And, I also have a little bit left to finish, which will be my project for tomorrow. All in all, I have been having a productive week so far.

How is everyone's Christmas knitting going? Nearly done?
Posted by Jen at 9:32:00 PM