Alright, so just yesterday I was saying "oh, I never knit anymore!" Well, that was early in the morning, before the sock bug came and bit me. And, holy crap, did it ever. Shortly after I blogged I flipped through the Sock Innovation book and picked a pattern. And, a day later I would like to introduce you to Rick: 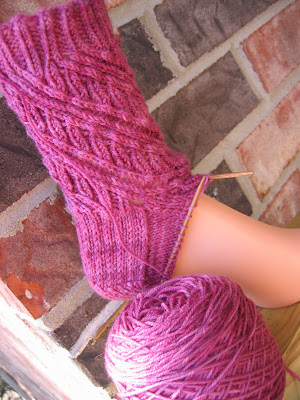 Rick is the name of the pattern, you see. My Rick is a little girly, but that's the way I like it. The yarn is Zen Yarn Garden (it was from my yarn bouquet that Alex gave me awhile back). If you looked in the Sock Innovation book, you may have noticed that are crazy charts for these socks. But, do not fear, these socks really are not that hard. You can practically memorize the pattern!

In addition to making some serious headway on the Rick sock, I also finished my Leyburns, Part II yesterday: 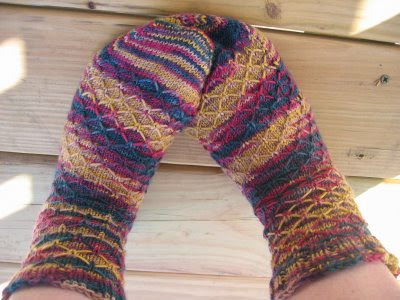 These were the second pair of Leyburns I did for the Socks That Rock KAL that was going on in the group on Ravelry. Lots of pretty of Leyburns to be seen there. If you are on Ravelry you should check out this thread. If you are not on Ravelry, why not?

Anyway to sum up my Leyburns:

The Pattern: Leyburn by Mintyfresh
The Yarn: Socks That Rock Mediumweight in the Panzanite colorway
The Needles: US Size 2 (duh, it's me knitting socks. Like I would use anything else!)
The Time to Knit: 2 months. Yikes! I was totally distracted by other knitting projects and my spinning wheel.
The Verdict: I am glad they are done so I can wear them to work tomorrow!

Well, that's it. In other random knitting news, I have signed up for Round 2 of the Office Swap on Ravelry (I love The Office and I love knitting swaps, so it's very good. You can join until Friday, April 3rd by going to The Office Swap group on Ravelry. Also, Wee Tiny Sock Swap III is going to be starting in April, so check out Yarn Miracle's blog for that goodness. I love me some wee tiny socks!